To the outside world, Azimuth Point looks like an idyllic enclave for the rich and beautiful, but… 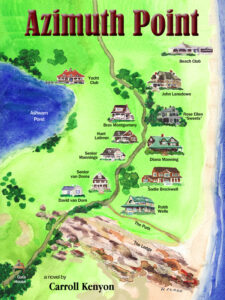 To the outside world, Azimuth Point looks like an idyllic enclave for the rich and beautiful, but lying not far beneath the surface is a world of greed, power, unrequited love, unsavory lust, betrayal, and ultimately murder. Azimuth Point elite live apart from those of lesser means, the residents of nearby Azimuth Village and the town of East Meridian.

A physical barrier, The Ledge, extends into the sea and is passable only at low tide, underscoring the distance between the two worlds. Their only common bond, and perhaps the only good thing the people of Azimuth Point ever supported, is the East Meridian Hospital. But now, handsome and tyrannical Brax Montgomery, whose career to this point has consisted of living off his wife’s money, is Chairman of the Board of the Hospital. Silver-haired Sadie Brockwell, long-time Azimuth Point resident and board trustee, suspects Brax and his immoral sidekick John Lansdowe have a hidden agenda. The beautiful surgeon Diana Manning has never stopped loving her childhood sweetheart Robb Wells, a successful, married architect. And why did the cute young waitress at the Ebb Tide Inn sneak into Azimuth Point that summer? Longing and fulfillment ebb and flow in time with crashing ocean waves on Azimuth Point. 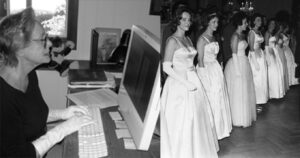 Carroll Kenyon was born and raised in Rhode Island. Seventh generation on one side (here since they brought the rocks in) and second generation on the other (just off the turnip truck). She lived in Austria for three of her formative years and traveled around Europe in an ancient Volkswagen staying in youth hostels. At the opposite end of the spectrum donning a white gown and white gloves she made her debut at the Philharmonic Ball in Vienna. Landing back in the USA, a real reality bump, she was part owner, photographer, and reporter of a small newspaper. She resides in Rhode Island with her husband and a herd of deer.

SOUTH COUNTY – A lifelong South County resident recently published her first novel about a fictional seaside community in Rhode Island. Carol
Hazlehurst, or Carroll Kenyon, the name under which she published
“Azimuth Point,” spent 12 years perfecting her book. She finally decided to put pen to paper in 2000 when at the beach with a friend who told her, ‘With your imagination, you should really write a book.”
So she began “Azimuth Point.” Multiple rewrites later, Hazlehurst finally published the book last September.
“It’s the strangest thing, all of these characters seemed to get legs and take on lives of their own,” Hazlehurst said of her writing process. “I just all of a sudden found that the ideas were just pouring through my head as if it were those people and that’s how it happened.”
When she had one of her many drafts completed, Hazlehurst gave the book to her neighbor.
“I can’t believe you killed her, you can’t kill her,” Hazlehurst’s neighbor told her regarding the fate of one of the main characters.
Other readers had the same reaction as Hazlehurst’s neighbor.
“Everybody was saying, ‘No, you can’t kill her, you can’t kill her,’ so I had to do a new ending,” Hazlehurst said.
Then, two years ago, a friend invited Hazlehurst to join the South County Writer’s Group, which meets twice a month in the Narragansett library. In order to join, Hazlehurst had to submit a copy of her book for review.
“I think they took one look at it and said, ‘Boy, does she need help,’” she joked.
But Hazlehurst credits the group with her book’s success.
“I got there and they forced me to essentially rewrite the entire thing four times,” she said. “But they were really fantastic. Most of them had all been published and without their help I never could have made it as good as it is.”
Tracy Hart, of Green Hill, who is also a member of the writer’s group, then further edited the book, which Hazlehurst called a “beach book.” Michael Grossman, of Narragansett, formatted Hazlehurst’s book for publication through his e-publication company, www.ebookbakery.com.
Hazlehurst insists that characters in the book aren’t based on anyone she knows in real life.
“Everybody said, ‘OK, am I in it?’” Hazlehurst said of questions she received when the book was published. “No, no, I tried very hard not to put anybody I knew in it.”
Hazlehurst said that she received complaints that it was difficult to keep track of all of the characters in her book, so with the help of her son, Tidge Holmberg, she built a website based on the book’s cover.
The cover is a watercolor map of Azimuth Point, done by Holley Flagg, an international artist and Rhode Island summer resident. Holmberg then used Flagg’s art to create www.azimuthpoint.com, an interactive website which allows users to click on locations and homes on the map to find out more about that particular place or the characters who live in each house.
“The response has been amazing,” Hazlehurst said about the “Azimuth Point” website. “People just love it.”
While Hazlehurst’s characters and Azimuth Point may be entirely fictional, she does reference real Rhode Island towns and landmarks throughout the book. This is no surprise given that Hazlehurst, who currently lives in North Kingstown, was born and raised in Wakefield. Her South County roots were also the basis for her pseudonym, Carroll Kenyon.
“I made up the name from my own name,” Hazlehurst said. “I added an extra ‘r’ and an extra ‘l’ to my first name and used my middle name as the last name.”
Hazlehurst’s middle name, Kenyon, is a family name. Her great-grandfather, O.P. Kenyon, founded Kenyon’s Department Store, whose building still remains on the corner of Main Street and Kenyon Avenue in downtown Wakefield.
Hazlehurst’s, or rather, Kenyon’s, “summer paperback,” as she calls it, is a true South County production. The book is the first in a triology.