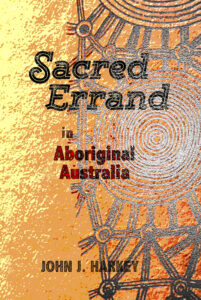 We all suffer loss — of a dear friend, a diamond, even a misspent day — and then we move on. But how can the Aboriginal people of Australia ever recover from the loss of their essential religious objects, the secret/sacred tjurunga (cher-UNGA) stones? During a century of British colonial occupation many tjurunga, which had bound together countless generations, were stolen, sold to collectors, or forfeited to missionaries.
Readers join naïve American Mark Hafford as he jets over the Pacific Ocean en route to Australia. At his feet is one of the Aboriginal “holy of holies,” a tjurunga stone inherited from his oilman father.
Mark is journeying to fulfill the deathbed wish of his father that the stone should go home. Mark’s intent: to hand the object off to an Australian museum, a plan that’s not as easy as it sounds. Mark soon finds himself caught in the turbulence of two cultures in conflict, the Aboriginal and the whitefella Australian. His quest takes us from museum to Lutheran mission, from Aboriginal settlements to the natural shrine (and tourist destination) of Uluru.
Historically deep-reaching, the book is peopled with real-life explorers and pioneer poets, along with Aboriginal mystics and myth tellers, outback townies and bushies, fathers and sons, lovers and despoilers. ﷯
Harkey’s Sacred Errand is a fictionalized memoir enlivened by the author’s actual experience in Australia. Above all, this book calls on us to respect and protect heritage. 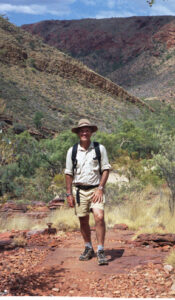 John Harkey’s Sacred Errand was first presented as an illustrated lecture series sponsored by the Rhode Island Council For The Humanities. He previously received a National Endowment For The Humanities grant to produce the photographic exhibition San Antonio, What is at Issue?, which examined historic and contemporary social issues of that city.

Raised overseas and in Texas, Harkey has lived in Spain and Argentina with his wife Ginger, a returned Peace Corps volunteer to Sierra Leone and a retired ESL and Spanish bilingual teacher. They now reside in Providence, Rhode Island. Their two children Abigail and Jeremy share an interest in indigenous cultures, and each received a Metcalf grant from the Rhode Island Foundation to pursue independent research in Ecuador and Australia.

The author’s father, a geophysicist, led his young family to Libya, then to Australia where Sacred Errand had its beginnings. Harkey’s mother was an artist and professional musician, employed as a church organist wherever the family landed.

Harkey is a graduate of the Rhode Island School of Design (MFA ’78) and is a retired, award-winning commercial photographer. His fine art photographs are in the collections of the Dallas Museum of Art, and the Amon Carter Museum of American Art.