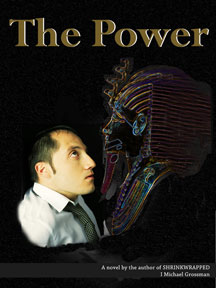 That breathing behind you is Edwin.

He’s an odd choice for the ancient ruler who grants a man the Power of invisibility. Why give it to Edwin–an inconsequential insurance actuarial?

Edwin gets the Power and begins his existential dive on a visit to the Metropolitan Museum. At an exhibit of Egyptian wonders, the boy Pharaoh Tutankhamen bestows Edwin with the reality-altering Power and the transformations begin.
Routinely ignored by women, initially Edwin uses his magic as a voyeur. Later, when his boss and nemesis Imelda fires him, a jobless Edwin discovers he can use the power to game the stock market. He gets very rich, very fast. But when, unseen, Edwin visits the FDA to gather insider information to manipulate stocks, he overhears White House executives as they plan to squash an important drug breakthrough. Their cynicism and politically driven ruthlessness enrages Edwin. What follows is a White House press conference unlike any ever held.

Our meek actuarial evolves with new adventures. He uses the Power to avert a dangerous military confrontation, and on a visit to a leading biotech firm, Edwin finds it’s up to him to prevent a global food crisis. Each episode helps him better understand the nature of what personal power is, and why he was chosen to receive the
Pharaoh’s gift.
The Power is driven by our archetypal curiosity about
invisibility–our fly-on-the-wall fascination with it in the tradition of
Wells’ classic The Invisible Man or seen currently in our
wonderment at Harry Potter’s magic cloak. In The Power, magic
becomes the metaphor that asks the question: how should
Edwin and in turn the reader use personal power. When does
power destroy and when does it fulfill us? The Power is a
vicarious ride that leaves readers feeling ever more empowered
and more aware of our own unique magic. 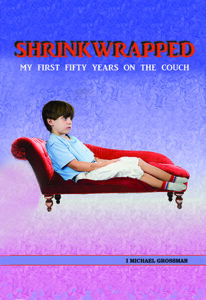 Shrinkwrapped: my first fifty years on the couch is a psychological rites of passage memoir. It provides an insider’s glimpse of going to therapy as seen through the patient’s eyes, in this case a patent who stayed fifty years, initially to battle depression and later to “know thyself.”
Shrinkwrapped recalls the 1950’s when therapy initially came to the U.S., revealing the powerful bias that existed against anyone who dared to see a “shrink.”

In his Siddhartha-like quest, the patient encounters an amazing range of therapies–from classical lie-on-the-couch Freudian analysis to new-age touchy-feely methodologies.

Shirnkwrapped is also love story, often funny but with candid
scenes of the battles that are prerequisite to a successful marriage 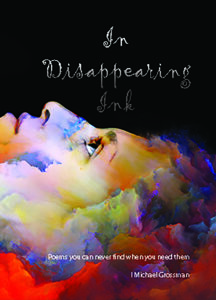 Why This Book is Titled “In Disappearing Ink”.
Little known poets are lucky to have an audience on open mic nights. On arrival, we pencil our names at the bottom of a yellow pad. The featured poet reads first and then, time allowing, authors on the list head to the podium to pour out a poem and our hearts. Polite applause may follow.
There’s a flicker in time after such a reading, in the seconds it takes the poet to travel from the podium back to his or her seat, when…kazaam…it’s as if the words of the poem vanish…are never heard again.
A friend, Tracy Hart, compares it to Buddhists creating a mandala. They may labor in shifts for weeks, moving grains of colored sand to craft magnificent art. But when finished, they wipe the art away…a metaphor that nothing man-made lasts.
That reality suggests the title: In Disappearing Ink and the subtitle, poems you can never find when you need them.
But it also brings to mind another human reality: the joy anyone who has ever written a poem knows – a pleasure arguably more immediate than writing in any other genre. Since so many try their hand at verse, I’m, betting you know how good it feels when you replace an imperfect with a perfect word; and that sense of pleasure when a jarring phrase is improved by shifting its position in a stanza.
Here’s to every poet’s hours at the keyboard, to the stanzas, to the rhymes created, to the contentment of making, then sharing a poem.

Do you think about aging?
Why face it now?
Here’s why.

Many societies embrace aging while ours considers it a defect.

We hide our signs of aging and whistle past our mortality. We have euphemisms to avoid the “D” word. We create a new apartheid–based on age–that segregates our elders, placing them in assisted living facilities and nursing homes.

All this fear of aging wrecks havoc. Denial limits introspection which erodes our self esteem. Fear whispers we have “all the time in the world” and leads us to unconscious choices. It undervalues precious time.

Can you imagine the tremendous benefits if you come to terms with your aging?

Coming to Terms with Aging: The Secret to Meaningful Time offers a better alternative–Life Awareness–an inspiring way to deal with life’s natural pathway. Learn the ten most common aging fears and how to overcome them. Learn the ten powerful benefits you gain when you do. Learn how aging serves life and why mortality is the engine that drives your life. The Life Awareness approach diminishes fear and frees you to move on to positive priorities.

Everyone ages.
We can live in denial, but we won’t escape it. Coming to Terms with Aging offers help accepting aging so you can enjoy the present–ever sacred second of it. 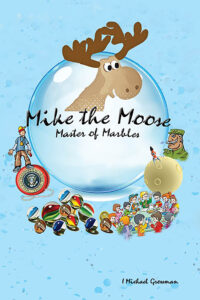 Mike the Moose, Master of Marbles, won’t tell his story to just anyone. It helps if you are solidly pro-moose and see no reason in the natural world why moose and man can’t live together in a harmonious family.

If assured of your position, Mike might let slip some juicy details of his adventures. Maybe how his first trip to a mall brought the police and how he wound up in a trash can. Or what the head of NASA says about him, and the spaceship to Mars, and the DANGERS he faced. Mike’s still galactically annoyed at his human sister Carrie for that one.

The easiest way to get Mike talking is to ask about his medal: his super shiny one from the State Department, after his encounter with Generalissimo Alfonso Ramonito Crakov del Buston, leader of the Spanish underworld. Mike insists he planned the entire mission to save America. Press him, and maybe, he’ll admit to a bit of help from his mom and top agent, Harry Malone. But the way Mike tells it, the mission was run by a moose.

Well c’mon, the Commander in Chief was impressed enough to give Mike one of THE most special, extraterrestrial gifts ever offered to man or moose!
Mike would be the first to confirm that he is as brilliant, courageous, and handsome as they say – especially when he stretches his antlers – but he’ll insist he isn’t trying to be Supermoose. All he wants is to revel in his new-found family and play marbles with Carrie. (You do know that Mike is just about the most famous expert on marbles on the planet, right?) But what’s a curious mooseling to do when duty calls? 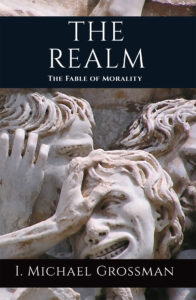 Did you tell the clerk she mistook your $10 for a $20?
It’s an easy moral choice but were you tempted? What if the choice means survival?
Edgar Wormwood is about to learn what he’s made of on a spiritual journey to an unfamiliar dimension. A time-travelling Gulliver, he arrives at The Realm – a world where all the rules change. Good and bad get flipped and rewards come based on nothing he believes is proper. Worse, if he fails to impress the spiritual Lilliputians that surround him, the consequences are unimaginably awful … and eternal.
Edgar is everyman on a metaphoric journey to our moral crossroads. You may see yourself in his Odyssean-styled tests – recognize your own internal battle when the choices are hard and they matter.
Travel with him to The Realm.