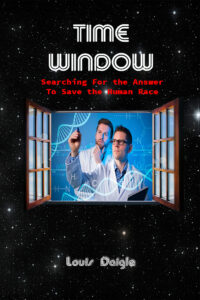 Searching For the Science to Save the Human Race

If we accept that the universe is finite; that there was a beginning, then it also makes sense that there may be an end.
The beginning started with expansion. But we know the force of gravity is slowing down that expansion. What if gravity brings expansion to a halt? And what if, at some point, the slowing expansion of our universe actually stops, then reverses direction?
What would it mean for man? When could it happen?
Time Window is author Louis Daigle’s fictional exploration of these questions. He considers the phenomenon of gravity’s impact in a subtle manner. He asks, “When will the scientific community connect the events we know occur, so that our future begins to emerge.
Where are we headed?

Louis Daigle was born in VanBuren, Maine during the depression years. As a young man in the forties when WWII broke out, he enlisted in the Army Air Corps and became an aerial navigator on a B-29 heavy bomber.

The war’s end led Daigle to the University of Maine where he earned a degree in Engineering Physics. Soon after graduation he joined the U.S. Naval Research Lab in Washington D.C.

Following that, the majority of Lou’s career was spent working for a New York based aircraft manufacturing company and a Connecticut aerospace firm.

Lou retired in 1987 and set to work writing Time Window.

Today at age 91, Lou resides in Wakefield Rhode Island with his wife Terry of 66 years, the childhood sweetheart with whom he has spent his life.