Story and Illustrations by: 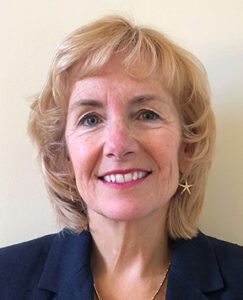 Margaret ‘Meg’ (Ober) Richards is the proud mother of three grown children, including two sons named Sam and Seth, and a daughter named Mary. Writing a children’s book with her mother, Elizabeth Ober, was a joyous collaboration when the boys were little and Mary was but a twinkle in Meg’s eye. Meg, by the way, is the 6th of Betty Ann’s 8 children, or – as Meg terms it – “one of the card table kids” (a cultural reference to Thanksgiving and the need to extend the dining room table with one or more card tables for the youngsters). Meg, her husband, and their children (including two beautiful daughters-in-law) all live in South County, Rhode Island… another magical place by the sea. 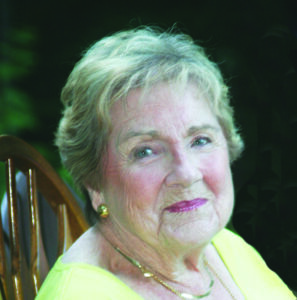 Elizabeth ‘Betty Ann’ Ober is the mother of 8 children, 21 grandchildren, and 11 great-grandchildren – as of Spring 2019, that is! Betty Ann honed her sketching talents when her children were little, sending them to school with wonderful cartoons drawn on their lunch sacks. Those sacks touched off the occasional bidding war in middle school cafeterias around New England (49 year-old example from Meg’s memorabilia, shown right). Betty Ann was born and raised on the North Shore of Massachusetts and although she has lived in other parts of the US, Ipswich is once again her home. 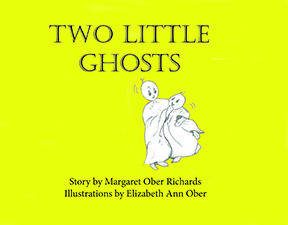 A delightful Halloween story chronicling the adventures of two ghost brothers one warm October night when the moon was full. Older brother Sammy loses younger brother Seth but finds him again in a slightly scary surprise ending. Charming illustrations by Elizabeth Ober, the author’s mother, make this a joyful read for children ages 3 to 8. 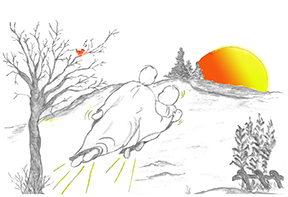 Two little ghosts on strings did sway
from a tree in the yard on a warm October day.
Heads made of tennis balls, bodies made of sheet … arms from the sticks of a popsicle treat.
Red leaves, yellow leaves, pumpkins on the ground … two little ghosts who made not a sound. 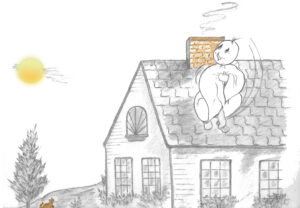