The Faces of War 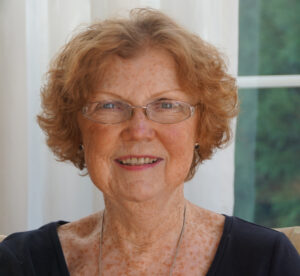 Jane McCarthy is a Registered Nurse with a Bachelor of Science degree in Health Care Administration and is a Certified Infection Control Practitioner. She grew up in Providence, Rhode Island, and attended school there. She is a member of the South County Writing Group and the Association of Rhode Island Authors.
Jane lives in Narragansett, Rhode Island, with her husband, Gerry. Together they have traveled extensively, visiting Europe, Greece, Morocco, and Ecuador. Jane has three daughters, seven grandchildren, and numerous friends who complete her circle. 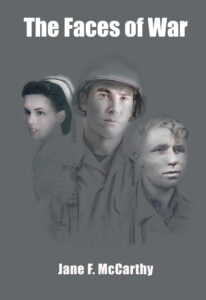 “…a great addition to the universe of World War II literature,” Jeff Ayers, Bestselling author
Jane McCarthy’s second novel brings a rare perspective to the horrors of World War II seen through the eyes of an American GI and a young German civilian.
Drafted at nineteen, American John Conway learns there’s no glory in Battle. Wounded by a sniper and unable to move, John lies next to his dead buddy and moans.
Karl Baum, a young German civilian, discovers the wounded American. Risking his family and his own life, Baum and his father drag him to their home in Southeast Germany to heal.
Recovering, Conway turns on Baum and forces him at gunpoint to lead him on a perilous journey through dangerous winter mountains to reunite with his troops in Italy where an act of betrayal changes the course of both men’s lives.
The Faces of War also gives a rare glimpse into life behind the gates of an American camp for German prisoners of war.
In a story with war, guilt, drug addiction and finally forgiveness, McCarthy’s characters bring alive an extraordinary time in history.
“…a daring, heart wrenching, pulse pounding story of hope,” Jon Land, USA Today bestselling author