Promise Heyward is a young black woman from Maryland’s infamous Prince George County, an only child to an early 70’s heroin dealer and his wife who was an aspiring writer. As an adolescent, Promise lost both of her parents to the dope game. She spent the remainder of her childhood living under the broken system known as foster care, only to learn just how lonely and complicated her life would be without her parents. As she became older, she evolved beautifully – a dine in the face with dangerous curves, and her sights were set on becoming successful. Given her beauty, coupled with the fact that she had a troubled past, she is definitely a diamond in the rough.

After enrolling in college to pursue a career as an author, Promise soon becomes involved with a ruthless Baltimore gangster by the name of Murda. They have a son together named Zaire, Promise’s crown jewel. Murda is notorious in the drug trade, a rising kingpin. And his crime family has the streets of Baltimore under lock and key. Over time, Promise begins to realize that Murda’s material wealth and the luxurious lifestyle that she’s grown accustomed to are all that he has to offer her. All of the jewelry, cars and clothes are overshadowed by his lies, abuse, infidelity, material greed and neglect for her and Zaire.

Finding herself entangled in Murda’s web of confusion, Promise finally decides to leave him. With the cards stacked against her, she is forced to struggle at first. That’s only until she meets a guy who fills that void in her heart, and shows her what true love really feels like. Murda eventually realizes that he has lost a good thing but, by then, it’s far too late. He can’t accept the fact that he’s been replaced and that another man is satisfying her. That’s when he starts doing any and everything he can think of to put an end to her fling…even it means that someone has to get hurt.

The Fiery Furnace, A Memoir
by Now Born

Now Born, born Coressell A. Smoot, is a full-time author as well as the CEO/ Chairman of Wild Life Publishing; a company which he launched in 2012. Wild Life was originally the name of a Hip Hop music group that Now Born was a member of. That group also consisted of two other members who were Now Born’s best friends ever since his early childhood years. They both passed away between the years of 2006 and 2012. Now Born named his publishing company Wild Life Publishing to carry on their legacies.
In 2012, Now Born published his first book, entitled Moving Target. Moving Target is a fast-paced Hip Hop urban fiction novel that is packed with action, drama and suspense. Now Born has experienced both: the lawful lifestyle of earning an honest living, and also an extreme life of crime. His criminal history could be considered as a gift and a curse. A gift in the sense that it enabled him to infuse such vivid imagery into his writings. A curse in the sense that the author has served a lengthy prison term on account of those experiences.
After publishing Moving Target, Now Born decided to grow his writing style and transcend the urban fiction bracket. That’s when he wrote and published his sophomore novel in October of 2014, a riveting Murder/Romance fiction novel entitled Promise: A Bloody Love Story. His tertiary and most talked about release was his memoir, entitled The Fiery Furnace. In this book, he chronicles some of his most eye-opening experiences while incarcerated and also intimate history about his childhood and his criminal past. He also shares his perspectives on delicate topics like God, love, religion, racism, values and etc. within this book. All of this author’s books are definite page turners and he can be contacted at wildlife.publishing@yahoo.com 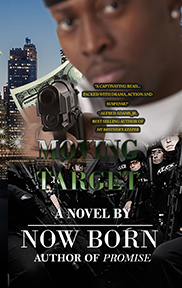 Some people live ordinary lives, while others live extraordinary lives. This young Bronx-kid, named Baseer, decided early-on that he was going to be the latter.
He began as an aspiring rapper, along with his two childhood friends named TK and Powerful. After becoming involved with a black militant group in Harlem, Baseer developed this revolutionary undertone, and his group began using their music to address the social ills that existed in their city.
Eventually, that revolutionary mentality evolved into a criminal one for Baseer and Powerful. That’s when they both began to engage in a life of petty crime, landing themselves behind bars for a short stint.
Baseer and his family moved to Fayetteville, NC, . so he decided to take a break from miking music. It wasn’t long before he and Powerful reconnected, turned it up a notch and started to pursue some “real” paper. That’s when robbery, drug dealing and even murder came into the picture.
Baseer has the heart as well as the smarts to make a lot of cash, and going to jail is not a part of his plan. He’s down for whatever it takes to dodge the pen, and he gets so caught up that he can’t turn back. He’s gotta keep it moving, like a Moving Target.