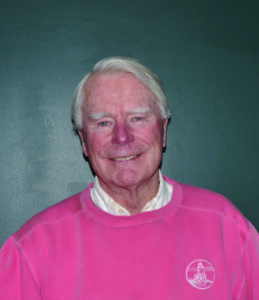 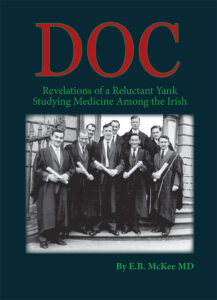 Revelations of a
Reluctant Yank
Studying Medicine
Among the Irish
by E.B. McKee, MD

Prodded by his formidable Aunt Bertha to become a doctor, college-grad, Gene McKee, agrees to explore Europe in search of a welcoming medical school. Seizing the opportunity will provide relief from the tedium and stench of a temporary job as a fish cutter in Rhode Island.

The frustrations and apparent futility of the quest, extending through Ireland, England, Scotland, and France, test his resolve. But just before the clock’s final tick, an unlikely acceptance to the College of Surgeons in Dublin opens the door to a future not exactly of his own choosing.

McKee’s rite-of-passage travelogue is replete with anecdotes of medical school and Dublin life during the late 1950’s and early 60’s. Recounted with self-deprecating humor and considerable honesty, we witness McKee’s transformation from a reluctant medical student to a competent physician. Enjoyably peppered with historical tidbits, amorous entanglements, and imaginative riffs, reading Doc and seeing Ireland with its rich cast of “characters” through a young Irish-American’s eyes, will surely bring smiles to the faces of readers and for some a twinge of recognition. 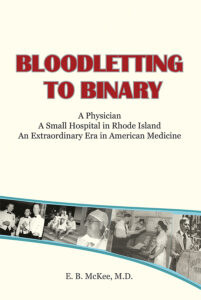 From Bloodletting to Binary

A Physician, A Small Hospital
in Rhode Island
An Extraordinary Era
in American Medicine

E. B. McKee’s first book, DOC, chronicles adventures before, during, and after graduating from the prestigious Royal College of Surgeons in Ireland, in 1961.
His self-deprecating and humorous style continues in Bloodletting to Binary. We rejoin McKee’s medical journey upon his entrance into the USAF. In 1970, following his military discharge, with a wife, three children, and paltry bank balance, he establishes a private practice in southern Rhode Island.
McKee’s career spans an era when medicine undergoes fundamental changes: from leeches to computer diagnostics, DNA testing, and robotic surgery. Vignettes capture South County Hospital’s bare-bone beginnings: rudimentary x-ray capability, a borrowed EKG machine, and limited lab resources.
Growth from a converted private home to the gleaming edifice that exists today are fondly recalled.
Hospital politics are on display. Watch the cadre of entrenched, older physicians circle the wagons to protect the status quo and slow the advance of specialist interlopers. Patients resist change too, fiercely loyal to the doctors who delivered their babies, performed their surgeries, set broken bones, and took care of their kids.
Bloodletting to Binary is a physician’s behind-the-scenes story of irascible colleagues; hospital dramas; and unforgettable patients, while offering a snapshot of a transformational period in American medicine. 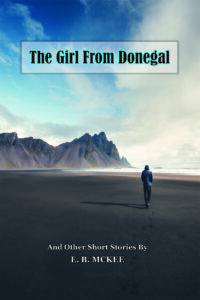 The Girl from Donegal
and other short stories

Short stories offer the reader a wide variety of literary fare, the result of a flexibility not available in other genres. This diversity is aptly demonstrated in E.B. McKee’s The Girl from Donegal, a mix of tales which might be compared to an assortment of chocolates: all are enjoyable, and each with a taste of its own.
As the author weaves his way between settings as diverse as a luxury liner cruising the Atlantic, the Namibian desert in South Africa and Scarborough beach in Narragansett, R.I. the reader becomes acquainted with a memorable cast of characters. You meet the wronged woman with love on her lips, but vengeance in her heart; a student whose vocation gets derailed by the gust of an errant breeze; the Block Island girl, the handsome Nazi submariner — and their fateful meeting during WW2.
These stories and others are written with a deft touch, understated wit and offered in an entertaining fashion.